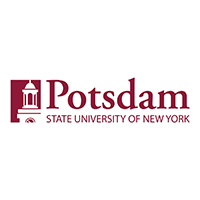 Potsdam State University in New York State is a public university located in Potsdam, New York. It is part of the State University of New York system. It was founded in 1816 and is one of the oldest universities in the United States. It consists of the School of Arts and Sciences, the School of Business, the School of Education and Professional Studies, and the Crane School of Music. The State University of New York Potsdam prepares students to become participating global citizens and enrich their lives through critical thinking, creativity, and discovery. As an inclusive academic community, the university is rooted in its historic role in providing exemplary teacher and music education and leadership in fine-arts and performing arts. The university is committed to making liberal arts and sciences the academic foundation for all students. SUNY Potsdam upholds the continuous sense of responsibility for the region and the world as a whole, increasing the appreciation and respect for various human experiences.

The school covers an area of ​​240 acres and consists of 44 buildings. The campus is located in the small village of Potsdam near the border between Canada and the United States. Small class size, a friendly community, rigorous academic courses, a first-class art environment, and all-around applied learning opportunities, the State University of New York Potsdam is an ideal place for your own development. The college has two libraries, the Frederick W. Krum Memorial Library in the center of the Academic Quadrangle and the Crane Music Library in Schuette Hall, Crane Building. The integration of art into campus life and curriculum means that students, faculty, staff, and community members have unique opportunities to interact with people and perspectives representing different backgrounds. The Barrington Student Union is the center of campus life and is always full of activities. The State University of New York Potsdam also provides special opportunities to improve skills and enhance their educational experience through our student leadership program.